Professor Colin Mayer on the ‘History and the Future of the Corporation’: Global History of Capitalism launch event, 14 March 2018 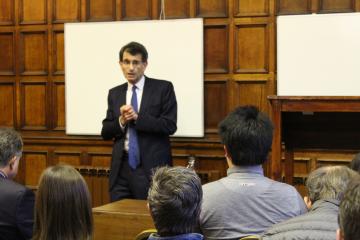 On 14 March we were delighted to host Professor Colin Mayer, Peter Moores Professor of Management Studies at the Saïd Business School, at an event to mark the launch of the Global History of Capitalism (GHoC) project.

John Bowers, Principal at Brasenose, began the proceedings by pointing to GHoC as a model for how colleges can bring together interdisciplinary work on the pressing research problems of our time.  GHoC’s Co-Directors, Professor Christopher McKenna and Dr Rowena Olegario, described the project and introduced Professor Mayer to a group of 45 graduate students and academics representing the fields of history, business, archaeology and area studies. Among those attending Mayer’s lecture on ‘History and the Future of the Corporation’ was Mr Mohamed Amersi, whose generous donation to Brasenose College enabled the creation of two Amersi Foundation Doctoral Studentships linked to the project.

The public, Professor Mayer said, do not trust business leaders because corporations today prioritise their shareholders over other stakeholders. This was not always the case. Mayer traced the roots of the corporation to the Roman period, where it served a public purpose. He said the corporation evolved over six stages, ending with today’s ‘mindful corporation’ characterised by social media and knowledge companies. The wide-ranging lecture touched on family-run businesses, regulation and governance, the financialization of corporations, and the challenge of developing a new model for the 21st Century. The latter is the focus of the British Academy’s research programme on The Future of the Corporation, led by Mayer, and for which the GHoC project is providing the historical framework. GHoC’s report seeks to recover the multiple roots of the corporation and the contexts in which the institution developed. By investigating the long arc of its history, GHoC aims to help business, academic and government leaders to reimagine what the corporation of the future might accomplish for its many stakeholders.

Professor Mayer’s lecture generated a lively discussion on business models, economic and anthropological theories, taxation and governance, and referred to a range of case studies of corporations from across the globe spanning several centuries. The event provided a strong start to the GHoC project, which is committed to enhancing Oxford's prominent position in the study of the global history of capitalism and promoting research that improves our understanding of modern business.