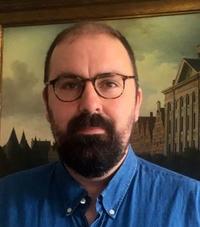 Q: What is your academic background and how did this lead you to an interest in the global history of capitalism?

A: I graduated summa cum laude, phi beta kappa from Columbia University, and hold a master's degree, with distinction, and doctorate in History from Princeton University. In my early 20s, I was a journalist in China just after it joined the World Trade Organization, and a few years later became a financial reporter in New York. I was reporting on structured credit instruments in 2008, when the financial markets imploded, and became interested in financial history -- taking evening classes after work. In particular, I became interested in the relationship between finance and global capitalism, and in the early history of finance's underlying term: money.

A: I'm working on a book about money, capitalism, and the American Revolution, under contract with Princeton University Press, and a virtual issue of Past & Present revisiting classic debates over the "mode of production" and the transition to capitalism.

Q: What is your involvement with the project?

A: I am the Career Development Fellow for the project in the Faculty of History. I helped organize our landmark conference in 2019, co-convene the research seminar on Political Economy and Culture in Global History, and continue work on various projects in financial history and the history of capitalism in early modern and revolutionary America.

Q: Any favourite events so far?

A: Our Convergence/Divergence Conference at Brasenose last fall, which brought together scholars from all over the world. It was wonderful to see so many people that I admire in one room, working through, and ultimately clashing over their basic assumptions about what global capitalism is and how to go about studying it. It marked a definitive end, I think, of the debates extending from the Great Convergence twenty years ago, and I hope, the beginning of a new way of addressing capitalism that is more attentive to interconnectedness and unevenness in the History of Capitalism.

Q: What do you think GHoC can bring to historians who do not specialize in capitalism?

A: The history of capitalism is modern history. There is no way to distinguish the two. Frameworks developed by historians of capitalism in the past informed studies in all areas of historical research from gender studies to political and diplomatic histories. It is our job, as historians of Global Capitalism, to continually reengage with those frameworks as a part of historical practice, to question, retool, and rework them in order to inform histories of the future.

Q: Could you recommend a book or article related to the global history of capitalism?

A: In order to have a sense of what capitalism is, it is important to get a sense of what it is not. To that end, I think every historian of capitalism should read Marshall Sahlins' Stone Age Economics about what he calls the "original affluent societies," neolithic groups affluent because of the relative ease with which they acquire everything they want.

Read our GHoC case studies here and watch this space for a series of interviews like this one.