Launch of the British Academy’s ‘Reforming Business for the 21st Century: A Framework for the Future of the Corporation’ 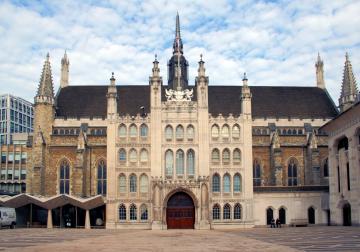 The British Academy’s Future of the Corporation programme was launched in 2017 to address the purpose of business and its role in society. Several research projects were commissioned in phase one, including a study of what history can tell us about the role of the corporation in society. This research was supported by the Global History of Capitalism project and led by Dr Christopher McKenna, Dr Rowena Olegario and Dr Leonardo Davoudi.

Phase one research findings were launched on 1 November 2018 at Guildhall, London, in a report entitled ‘Reforming Business for the 21st Century: A Framework for the Future of the Corporation’. The introductory talk was given by the Rt Hon Greg Clark MP, Secretary of State for Business, Energy and Industrial Strategy. Leading business, government and academic figures were also in attendance, including Professor Colin Mayer (academic lead of the programme), who launched the Global History of Capitalism project on 14 March 2018, and Mohamad Amersi (The Amersi Foundation), a supporter of the Global History of Capitalism project.

More information about the launch event and report is available here.

A paper on the findings of the history-focused research project will be published by the Journal of the British Academy and is available online ahead of print.