We talk to Ben Schneider, History DPhil and recipient of one of the Global History of Capitalism's 4th year doctoral studentships 2020-21. 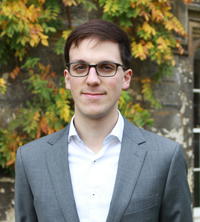 What is your academic background and how did this lead you to an interest in the global history of capitalism?

When I started my BA I planned to study Economics and Political Science. I was drawn back to history, which I had always enjoyed in high school, over the course of my degree. At Cornell, I worked with Professor Edward Baptist on some projects related to the history of capitalism and enslavement in the United States, including Freedom on the Move and his co-edited book American Capitalism: A Reader. Most of my classes focused on social and political history, but I spent a year at the LSE and became interested in the Industrial Revolution.

I came to Oxford first for the MSc in Economic and Social History and wrote my dissertation on the mechanization of textiles in Britain during the 18th and 19th centuries, using it as an example of Schumpeterian creative destruction. While doing archival research, I came across many manuscript sources that showed preindustrial textile workers were paid far less than previously thought. This challenged Robert Allen's explanation for the Industrial Revolution: while he claimed that high wages led to labor-replacing innovation, I found wages that were far lower than his scattered evidence.

Jane Humphries and I then built upon this research with further archival work and econometric analysis. In 'Spinning the Industrial Revolution' we used more than 2500 observations of textile workers' wages to show that wages for the part of the textile sector that industrialized first were lower than Allen had claimed and could not explain mechanization. In response to criticism from Allen, we expanded our dataset in a second paper, 'Losing the Thread', using evidence on unit labor costs to both reinforce our original contention and suggest that British entrepreneurs were most interested in using machinery to make the cheap labor of women and children more productive. We also highlighted that spinning was one of the earliest examples of new technology replacing workers, which is a phenomenon that economists refer to as 'technological unemployment'.

Tell us a bit more about your current research and what aspect of this you would like to develop into a GHoC case study?

My PhD project examines the impact of technological change on jobs. I aim to identify generalizable aspects of how innovation has changed work in the past and inform present-day debates about how jobs will change as robots increasingly compete with human labor. Understanding how technology has affected work in the past will enable policymakers to prepare workers and economies for new technology.

In my thesis, I use transportation and spinning as case studies and compare developments in Britain and the Northeastern US from c. 1750–1910. Innovation transformed both sectors over this period. Home-working hand spinners were replaced by smoky, noisy factories, and lone post riders or stagecoach drivers gave way to steam-powered railroads by the middle of the 19th century. The higher productivity of factory spinning destroyed one of the major preindustrial occupations for women and children in Britain, and this job destruction was an important force leading to the development of the male breadwinner family in the 19th century. In transportation, the railroads vastly increased the complexity of construction, maintenance, and operation, all of which required more specialized workers. Specialization led to much greater differences between the best and the worst jobs—unskilled blue-collar employees saw little improvement in their work, while the growing variety of administrative workers on railroads benefited from higher pay and safer conditions.

I am currently working on the late 19th and early 20th century. By about 1850 the key inventions were well established—many of the major railroad and canal networks had been built and factories had entirely replaced hand production in textiles. However, there were still important changes in the availability of 'good jobs' in these sectors. To date, my findings for the 1850–1910 period suggest that while there were inventions that could make jobs safer (such as improved railroad couplings), employers only adopted these slowly and under pressure from labor unions and politicians. The takeaway is that most companies will not adopt worker-friendly employment practices unless organized labor and governments force them to do so. A laissez-faire approach to work regulation in the 21st century is likely to end with more people in precarious, low-wage employment.

My planned case study is a bit different, although it addresses another modern problem: how to decide on and complete large-scale infrastructure projects successfully. Many rich countries including Britain, the US, and Germany have allowed their highways and public transit to decay over recent decades, and there are increasing calls from think tanks, economists, and policymakers for renewal of transportation networks and projects such as national broadband. However, there are many examples of expensive 'white elephant' projects that consume public funds and have little social or economic benefit. How can policymakers choose which infrastructure investments to support, and what are the key state capacity factors that make a project successful? My case study will look at transportation projects in the 19th century US to answer these questions. The key ports on the eastern seaboard—New York, Philadelphia, Boston, and Baltimore—all wanted cheaper and quicker access to the American interior, but they took different political and technological approaches. New York benefited from forward-thinking leadership and propitious geography in the construction of the Erie Canal, while Pennsylvania's fear of being left behind meant the state spent millions of dollars on a mixed canal and inclined plane project that was obsolete before it had been completed. Boston nearly copied the disastrous Pennsylvanian model, but after intense debates in the state legislature they avoided this pitfall and successfully adopted the emerging technology of the steam railroad.

What have been your biggest influences in relation to your research?  Do you have any recommendations for books, articles, media related to this area?

Between my undergraduate studies and MSc, I worked for a supportive housing organization in New York City. While there was little substantive cross-over in my work there and my academic research, it convinced me of the importance of studying pressing challenges for the modern world. Academic research uses public money—whether directly through research councils or indirectly via tax-deductible charitable donations—and we need to make sure that we are making socially-beneficial use of those resources. It is also crucial that we know how to communicate what we are doing to the public, and to explain why it is important.

I research the impact of technology on jobs because there is a large (and growing) body of evidence that technological change will be one of the key challenges of the coming decades. One of the best recent books on this topic is The Globotics Upheaval by Richard Baldwin. He describes how a combination of first telecommuting and then artificial intelligence will threaten many of the remaining good white-collar jobs in rich countries. Another interesting (and very heterodox) view on the future of work is provided by Aaron Benanav in his forthcoming book Automation and the Future of Work.

What do you like doing when you’re not buried in your research!?

I stay away from research-related material, but I enjoy reading about the history of sports (Derek Birley's A Social History of English Cricket and Roland Huntford's Two Planks and a Passion: The Dramatic History of Skiing are recent favorites) and pre-coronavirus I liked picking out battered gems from the history books section of Oxfam. I'm a temporary convert to running because of Oxford's climate, but I prefer cycling in the summer and cross-country skiing when I can travel to a suitably wintry location.