'The Emergence of the Offshore Economy 1914-1939', book chapter by Christopher McKenna and James Hollis 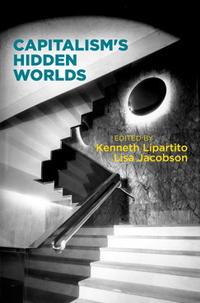 An edited collection featuring a chapter on ‘The Emergence of the Offshore Economy, 1914-1939’ by Co-director of the Global History of Capitalism Project, Professor Christopher McKenna, and research student, James Hollis was published recently by the University of Pennsylvania Press.

Capitalism's Hidden Worlds (eds.Kenneth Lipartito and Lisa Jacobson) "[...] sheds new light on this shadowy economic landscape by reexamining how we think about the market [...] the essays in Capitalism's Hidden Worlds explore how the capitalist marketplace sustains itself, how it acquires legitimacy and even prestige, and how the marginalized and the dispossessed find ways to make ends meet." University of Pennsylvania Press

James Hollis elaborates:  'Mention “offshore” and people often assume you are just referring to small islands, but “offshore” is actually a legal expression as much as a geographical one.  It covers the various ways that businesses add value through cross-border regulatory arbitrage, for example by basing their operations in low-tax countries, or using “flags of convenience” to avoid maritime controls.  Previous studies of this “offshore economy” tend to focus on the period after 1945, when international capital flows were heavily regulated in order to sustain fixed exchange rates.  That timeframe struck us as too narrow because the real turning point, in terms of the growth of tax and regulation, came earlier with the onset of the First World War.  The more we investigated, the more evidence we uncovered of a thriving interwar offshore sector; and we identified a complex chain of causation involving economic nationalism, economic warfare, tax and regulation, and regulatory arbitrage.  The chapter in Capitalism’s Hidden Worlds represents our initial attempt to assemble this evidence and to explain the origins and early development of the offshore economy, and we hope that it will help stimulate debate with other scholars working in the field.'

James Hollis was a recipient of one of the Global History of Capitalism project's doctoral studentships. Co-author and Co-director of the Project, Christopher Mckenna writes: 'One of the great pleasures in directing the Global History of Capitalism project is in working with Oxford's doctoral students doing cutting edge research.  I was delighted that James Hollis was willing to share his research and for us to contribute a chapter to Capitalism’s Hidden Worlds.  James is a gifted historian with a talent for explaining technical issues.  I hope that this will be just the first of many collaborations between the two of us in the years ahead.'